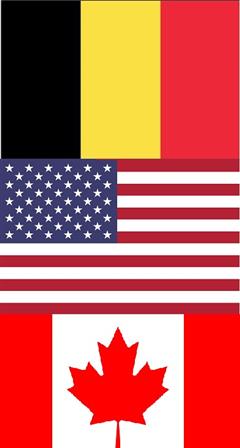 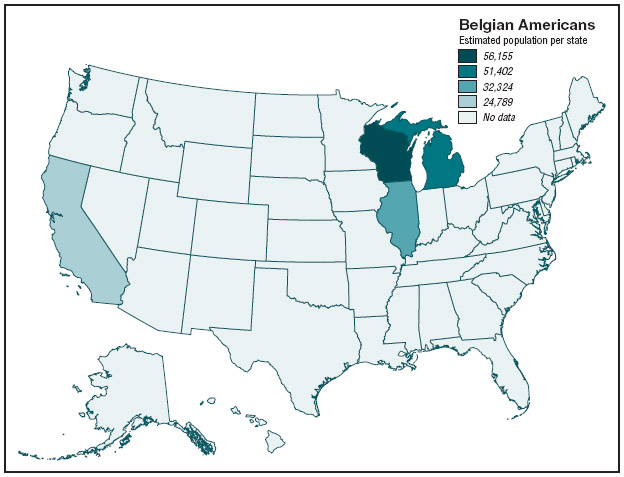 Belgian Americans are Americans who can trace their ancestry to immigrants from Belgium who emigrated to the United States. While the first natives of the then-Southern Netherlands arrived in America in the 17th century, the majority of Belgian immigrants arrived during the 19th and 20th centuries.

For several coastal areas in North America, European colonization began with the arrival of migrants from the Southern Netherlands. For example, Jessé de Forest was already active on Manhattan Island before the Dutch. He was the head of a group of settlers from the region of present-day Wallonia. New Jersey, Delaware, Connecticut and Pennsylvania are also places where the later Walloons were the first Europeans to settle. On the Flemish side there is father Louis Hennepin, a Catholic priest, who discovered the Niagara Falls for the other settlers. A street in Minneapolis and a county in Illinois are named after him.

In the 1840s, the scarce land was a reason mainly for farmers from northern Belgium to immigrate to the United States. In addition, several Flemings have left because of the Walloon dominance in their homeland. Because of the linguistic similarities with their northern neighbours, they identified with Dutch Americans there. The first Flemish settlements appeared in and around Detroit, Michigan, and South Bend (Indiana). There they looked for cheap agricultural land to work on, after which their descendants went to work in industry.

Immigration from Wallonia only really took off in the twentieth century. After the German occupations of the First and Second World Wars, ethnically diverse Belgium gained a greater sense of unity. From that moment on, the composition of Belgian migrant groups gradually began to change. More and more Walloons have made the Atlantic crossing to start a new life in French-speaking Canada. A number of these moved to the south, where they were subsequently labeled 'French-Canadian American'. They have settled in northern Michigan, Minnesota, and Winsconsin. Today, the cradle of Belgian-American culture can be found in the latter state. More than 50,000 Belgian Americans live and work in the counties around Green Bay. They are partly the descendants of Walloon farmers, who bought up more than 80 percent of agricultural land in the second half of the nineteenth century.

According to the 2019 US census, there are 339,512 Americans who identify themselves as partially or fully of Belgian ancestry.

According to the 2000 U.S. census, there were 360,642 Americans whose ancestors came from Belgium.